At eighteen, Harlem Markeson sets out to start a new life in the city for which she’s named. Propelled by the violent deaths of her wealthy parents, Harlem takes the first bus out of Greensboro, North Carolina and heads to New York City. There, she’s thrown into the clandestine world of an underground speakeasy. Lured by Sisters Ruth and Mary into Lady Magdalena’s Manor, a brothel for beautiful dancing girls, Harlem must learn to trust: but who? Harlem’s Awakening is a compelling story set in the 1940’s about a young woman who must journey through hell to become the strong person she is meant to be.

“Author Peppur Chambers brings to life 1940’s America with her debut novel, Harlem’s Awakening, following the unsettling journey of eighteen-year old Harlem Markeson as she desperately tries to reinvent herself in New York. With believable characters such as the conniving Sisters Ruth and Mary, the ruthless Lady Magdalena, and the mysterious Brown Betties, Peppur has created a seedy underworld where each character fights to unburden their deepest secrets. Harlem’s Awakening marks a strong debut and an irresistible read.”

In this long-anticipated follow-up to Harlem’s Awakening, a kidnapped Harlem Markeson fights against the stronghold of Lady Magdalena’s evil speakeasy. With the will to escape, but without the know-how, she turns to the sisterhood of The Brown Betties and dancing Rainbow Girls for a way out before she is sold to the highest bidder. Meanwhile, with the clock ticking, Jonas, the only person who knows her whereabouts and cares enough to rescue her, battles institutions to not only free Harlem, but to find his long-lost daughter. 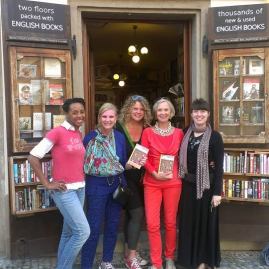 In a Book Club? Fabulous! I’d love to attend or Zoom in. Please contact me!

My one-woman show, Harlem’s Awakening: A Show About a Book, With a Book

How to Act as If You Already Are

Goal Setters, Dreamers & Visionaries: Go for what you want. …this stuff we see others doing doesn’t happen over night and it takes investment of time, energy, desire and money. I am here to show and tell you that you can do it, too! Just be mentally prepared!